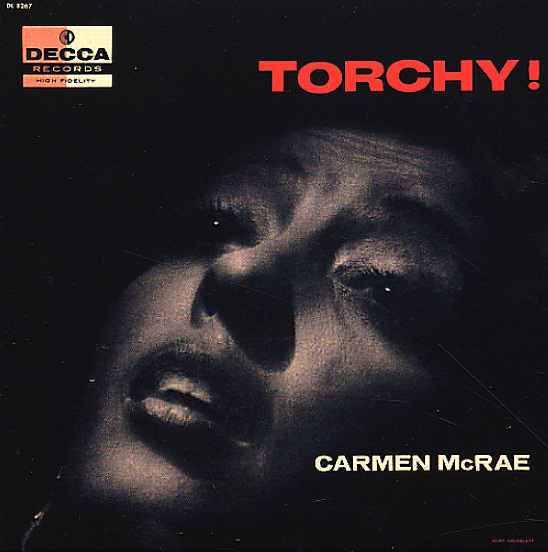 Early work by Carmen McRae – and a wonderfully titled set that's certainly Torchy all the way through! Carmen's singing in a lush, romantic style – working with backings from Jack Pleis and Ralph Burns – in a mode that features larger orchestrations, but which still very much has Carmen's vocals at the top of the mix. As was well demonstrated by Carmen in many later recordings, she hardly needs a band to help her set a mood – and on this set, although the orchestra is large, they're there mostly to color in the spaces between the notes, and create more of backdrop for Carmen's evocative vocals. Titles include "But Beautiful", "Midnight Sun", "My Future Just Passed", "Yesterdays", "Star Eyes", "We'll Be Together Again", and "Speak Low".  © 1996-2023, Dusty Groove, Inc.
(Out of print – and includes obi!)

I Am Music (Japanese pressing)
Blue Note (Japan), 1975. Used
CD...$14.99 (CD...$8.99)
Carmen McRae really opens up on this sweet 70s set for Blue Note – expanding past the traditional jazz of her roots, and even some of the groovier work of her Atlantic years – into a sweeping, contemporary sound that's all adult, all the way! The vibe is great – in the same ... CD

Lover Man (Japanese pressing – with bonus tracks)
Columbia/Sony (Japan), 1962. Used
CD...$6.99 8.99
An overlooked gem from Carmen – one of her few albums for Columbia from the 60s, and a wonderfully swinging small group session that's got a much more relaxed feel than some of her earlier sets! The album's ostensibly a tribute to Billie Holiday – but it's taken in a way that's ... CD

I'm Coming Home Again
Jazz Around (Italy), 1978. Used
CD...$2.99
A great smooth soul session from Carmen McRae – an album that's not nearly as well known as her American sides of the 70s, but which is possibly even better overall! The record features a great batch of smooth soul arrangements by Mario Sprouse – a blend of jazz and contemporary soul ... CD

I Am Music
Blue Note/Big Break (UK), 1975. Used
CD...$8.99 (CD...$14.99)
Carmen McRae really opens up on this sweet 70s set for Blue Note – expanding past the traditional jazz of her roots, and even some of the groovier work of her Atlantic years – into a sweeping, contemporary sound that's all adult, all the way! The vibe is great – in the same ... CD

Fine & Mellow – Live At Birdland West
Concord, 1988. Used
CD...$5.99 (LP...$1.99)
A mighty nice setting for Carmen McRae, and a bit different than usual too – especially given that the backing group is a pretty soulful tenor/organ combo! Jack McDuff handles the Hammond, and Red Holloway plays both tenor and alto, with some nice comping from Phil Upchurch on guitar in the ... CD

Portrait Of Carmen
Atlantic (Japan), 1968. Used
CD...$9.99
An excellent album from Carmen McRae – one of her hippest records ever, and a great set of vocal gems that often gets overlooked! Arrangements are by Benny Carter, Shorty Rogers, and Oliver Nelson – and the album's got a swinging groovy style that pushes Carmen past her straighter jazz ... CD

Complete Decca Recordings (2CD set)
Decca/GRP, Late 40s. Used 2 CDs
CD...$5.99
A comprehensive collection of work from a key, although under-recorded stretch in the career of Billie Holiday – material that comes after her early years at Columbia, and before her 50s revival at Verve! CD