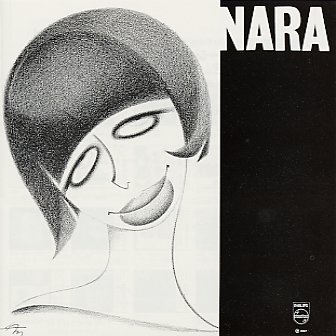 One of the loveliest of all the bossa singers is caught here in some superb arrangements by Oscar Castro-Neves! The set's got a wonderful feel – with moments that are rootsier than your average bossa diva record, and others that are baroque enough to hint at the direction Nara would take a year later with Rogerio Duprat. Production is excellent, and Edu Lobo even guests on the track "De Onde Vens". Other tracks include "Lancha Nova", "Inspiracao", "No Corado Da Saideira", "Camisa Amarela", and "Se Voce Quiser Saber". Fantastic cover, too! This edition also features two bonus tracks as well.  © 1996-2022, Dusty Groove, Inc.
(Includes obi.)

Nara Leao – Serie Sem Limite
Universal (Brazil), 1960s/1970s/Early 80s. Used 2 CDs
CD...$9.99
From the bossa years, to the Tropicalia generation, to the MPB hit days of the 70s, and even up into the 80s – Nara Leao has always been one of Brazil's most compelling singers, as you'll hear on this well-selected batch of 30 tracks pulled from her classic recordings for Philips and Elenco. ... CD

Sonho De Um Carnaval (aka Per Un Pugno Di Samba)
Rym Musique/Universal (France), 1970. Used
CD...$24.99
An amazing record – one that stands as one of Chico Buarque's greatest from the 70s! The set was recorded in Italy in 1970 – and features Chico singing lead vocals over backings handled by Ennio Morricone – all in a style that's a perfect blend of MPB with the best elements of ... CD

Os Mutantes (1968)
Universal, 1968. Used
CD...$8.99
A landmark album from late 60s Brazil! This is the first – and the wildest – album by this legendary group that was one of the founding forces of the Tropicalia movement – a brilliant musical statement that easily ranks with some of the most groundbreaking late 60s American work ... CD

Bossa Nova/Carlos Lyra (1960)
Philips (Japan), 1960. Used
CD...$22.99
2 of the earliest albums ever from bossa genius Carlos Lyra – back to back on one CD! The first album, Bossa Nova, definitely lives up to its title – as it features Lyra's wonderful original compositions wrapped around a set of orchestrations that are lightly breezy, and which dance ... CD

Tribute To Caetano Veloso
Universal (Brazil), 2012. Used
CD...$8.99
A wonderful tribute to Caetano Veloso – put together by a really surprising range of artists! The tunes are all classic Veloso compositions – Brazilian nuggets that have been making our lives wonderful for years – and they get fresh reinterpretations by a range of artists that ... CD