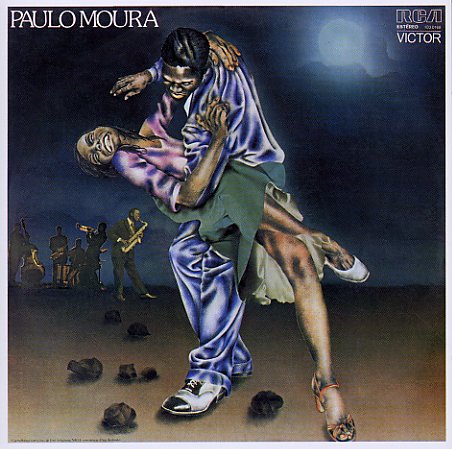 A great album by Paulo Moura – and one of the most perfect realizations of his strong ability to mix jazz with more traditional Brazilian rhythms and instrumentation! The album is a wonderfully conceived bridge between cultures and periods in Brazil – performed by Moura on a rootsy style of clarinet, but held together with some tremendous arrangements by Wagner Tiso, who also plays organ and piano on the session. Titles include "Espinha De Bacalau", "Noticia", "Carimbo Do Moura", "Dois Sem Vergonha", and "Pedra Da Lua".  © 1996-2022, Dusty Groove, Inc.
(Brazilian pressing, with inner sleeve. Cover has light wear.)

Miucha & Antonio Carlos Jobim
RCA (Brazil), 1977. Very Good+
LP...$24.99
A pretty darn sweet vocal session from the duo of Miucha and Antonio Carlos Jobim – recorded with lots of bossa overtones, very much the same spirit as the legendary Elis & Tom album of the mid 70s! Chico Buarque participates in the session, and Jobim even lends his vocal talents to a ... LP, Vinyl record album

Cavaquinho Camarada
RCA (Brazil), 1977. Near Mint-
LP...$9.99 11.99
Lots of great work on cavaquinho from Waldir Silva – as you might guess from the title – and a set that also features his famous theme for Pecado Capital! LP, Vinyl record album

Ritmo Gostoso
RCA (Brazil), Mid 60s. Very Good
LP...$24.99 36.99
A cool set of bossa/samba organ work from Sylvia Vianna – definitely with some of the "ritmo" promised in the title! Cover has some light wear, but is nice overall. LP, Vinyl record album