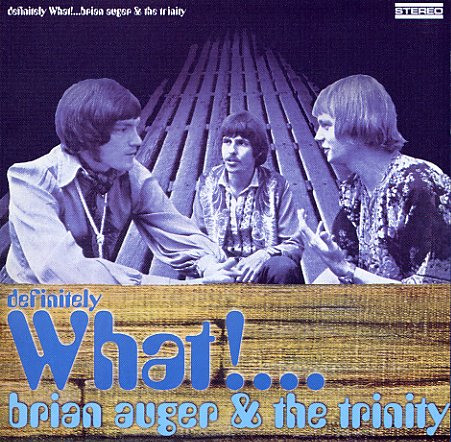 Definitely What (with bonus track)

Brian Auger's first album away from singer Julie Driscoll – and a landmark batch of funky organ work that made big waves in both the rock and jazz worlds at the time! Auger's really stretching out here – getting past the simple R&B of his roots, and going into a bubbling funky style that's clearly touched by chromatic inspirations from Wes Montgomery and Jimmy Smith – both of whom are referenced by some of the song structures on the set. The album's filled with killer organ-based instrumentals – some lean and stripped down, others full and rich – and all of them coming across with a richly soulful sound that you'd hardly expect from a member of the British rock scene! Titles include "Day In The Life", "Red Beans & Rice", "Definitely What!", and his classic "Bumpin' On Sunset". Great stuff, and the kind of Brian Auger material that will convince you of his talents! Includes the bonus track : "What You Gonna Do?".  © 1996-2022, Dusty Groove, Inc.
(Out of print.)

Soko
Sunnyside, 2021. Used
CD...$9.99 (CD...$15.99)
The guitar of Jean Jacques Rojer sounds mighty nice here next to the vibes of Warren Wolf – a player we really love on his own records, and who makes a lot of magic here with Jean Jacques! The mix of instruments provides plenty of color and tone – especially given the way that Rojer ... CD