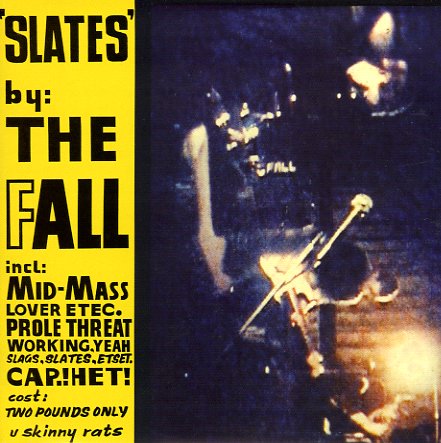 A record that really sums up the genius of the early Fall at their best – not their first album, and not even a full-length set – but one that has all the wit and energy of Mark E Smith really coming into sharp focus! The group still have plenty of noise in their music, but they've also found a way to perfectly hone it to the lyrical punch that is their main strength – those brutal, staccato lines delivered by Mark – shredding social structures and sacred cows with razor-sharp wit, but in ways that feel like they're light years from the punk lyrics of a few years before. And heck, the whole thing's even a bit tuneful at times – surprisingly catchy, which only gives Smith's words even more power – on titles that include "Fit & Working Again", "Leave The Capitol", "Slates Slags Etc", "An Older Lover Etc", and "Prole Art Threat". The LP version includes the original tracks from the EP – plus their 1981 Peel session and an early 80s studio outtake!  © 1996-2022, Dusty Groove, Inc.

Cupid & Psyche 85
Rough Trade, 1985. New Copy (reissue)
LP...$21.99 22.99 (LP...$14.99)
An 80s classic from Scritti Politti – a group who'd worked their way up from the postpunk underground to the top of the charts, yet still managed to keep some of their leftist politics intact! The album's filled with catchy little numbers, but they also belie a deeper sensibility that folks ... LP, Vinyl record album

Anomie & Bonhomie
Rough Trade, 1999. New Copy 2LP Gatefold (reissue)
LP...$26.99 27.99 (CD...$14.99)
A really surprising set from Scritti Politti – still as catchy as back in the 80s, but also tuned to a new generation too – with surprising hip hop and soul crossover work from Mos Def and Meshell Ndegeocello! Given the soulful sound of the group back at the start, and the surprisingly ... LP, Vinyl record album