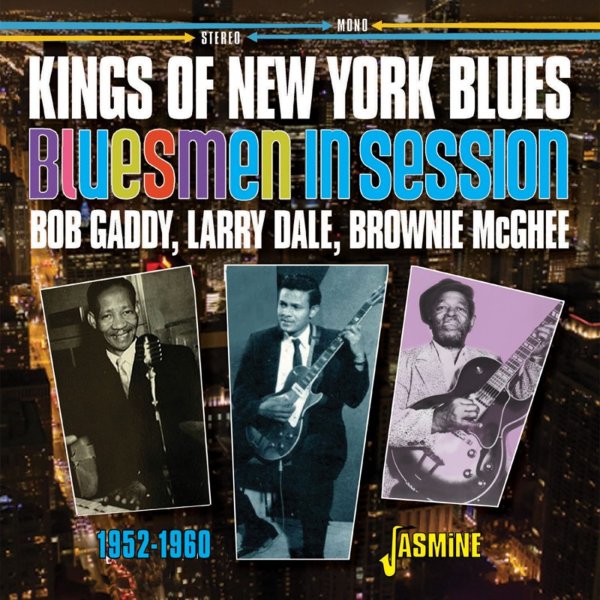 A really well-done dip into the New York City blues scene of the 50s – one that presents a wealth of work we might not have heard otherwise, pulled from labels that include Old Town, Harlem, Jax, Wing, Dog, and Groove! There's a nice mix of material here that really shows the way the city was able to act as a crossroads for styles that were not necessarily homegrown, but could certainly find a home in its diverse community – as some cuts have more of a rural bent, others have some of the more electrified touches that were coming into urban blues, and a few have some of the jump/jazz styles of the R&B generation. Titles include "No Help Wanted", "I Believe You Got A Sidekick", "Bicycle Boogie", "Operator", "Slow Down Baby", "Paper Lady", and "Rip & Run" by Bob Gaddy; "You Better Heed My Warning", "Please Tell Me", "Feelin All Right", "No Tellin What I'll Do", and "What Your Love Means To Me" by Larry Dale; "A Letter To Lightnin Hopkins", "Worrying Over You", "Bluebird Bluebird", and "My Confession" by Brownie McGhee – and more by Cousin Leroy, Alonzo Scales, and Paul Williams too.  © 1996-2022, Dusty Groove, Inc.

Down Home Blues From Chicago To New York
Jasmine (UK), Mid 50s. New Copy
CD...$15.99 16.00
A great split set of recordings – one that brings together a good deal of rare material from both the artists on the cover! The set begins with important Chicago recordings from Homesick James – great electrified work, but often with a quality that still echoes some of the rural roots ... CD

I'll Be Rockin – Arranger, Writer, & Session Musician – The Rhythm & Blues Producers
Jasmine (UK), 1950s/Early 60s. New Copy
CD...$15.99 16.99
A great look at the mighty talents of Leroy Kirkland – not much of a lead star on his own, but a fantastic force in the worlds of soul, blues, and R&B in the postwar years! Leroy's one of these guys who really starts to show up when you pay attention to credits on older singles – a ... CD

Do The Blues 45s Vol 3 –The Ultimate Blues 45 Collection
Think (Japan), 1960s. New Copy
CD...$24.99
A funky little collection, and one that's got way more going on than just the blues 45s mentioned in the title – as the cuts here include some great instrumentals and soulful work as well! We loved the previous volumes in this series, and this one is every bit as smoking – a mix of ... CD