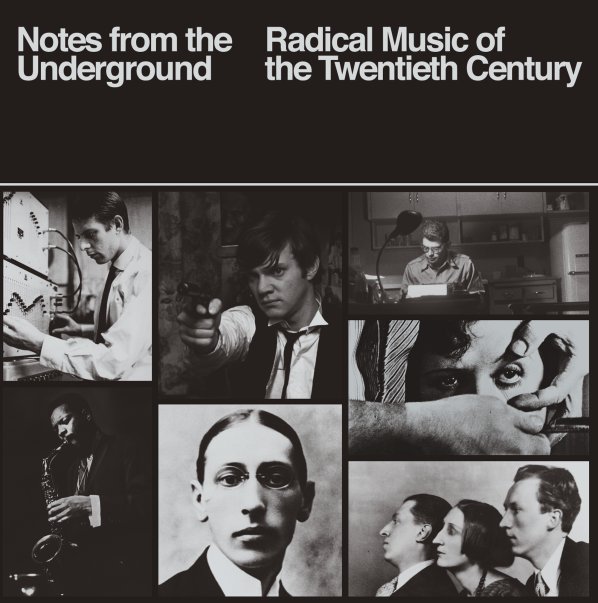 A fantastic set that really lives up to its title – by presenting a variety of music that all represented the farther reaches of modern sounds in the middle of the 20th Century – electronics, avant classical, and even groundbreaking jazz and poetry as well – all put together in a package that's as sonically striking as the cover! What makes the set great is the way it jumps around in genres and styles – very much as if it were representing the record collection of some New York intellectual at the start of the 60s – with a mix of sounds from Varese, John Cage, Stravinsky, Stockhausen, Miles Davis, Bill Evans, Charles Ives, Schoenberg, Ali Akbar Khan, Satie, Allen Ginsberg, Ravi Shankar, and Ornette Coleman! There's also some work by Daphne Oram, who wasn't as available on vinyl over here at the time – but whose contributions sit nicely next to work by Pierre Schaeffer on the set – which is also rounded out by some tracks from The Prisoner and Un Chien Andalou too. 4CDs, great notes, and a heck of a lot of groundbreaking music!  © 1996-2023, Dusty Groove, Inc.

Musique Concrete 1956 to 1962
Fremeaux & Associates (France), Late 50s/Early 60s. New Copy 2CD
CD...$19.99 29.99
The birth of a key moment in avant garde music – served up here in a series of recordings that are nicely different than some of the other musique concrete material on the market! The package brings together some early "panorama" presentations of the work – two from the Club ... CD

Les Nouvelles Musiques De Chambre Vol 2
Sub Rosa/Modern Classics, 1989. New Copy
CD...$3.99 16.99
A split LP, and one that features wonderful sounds from each of the two artists – both of whom are very much working in the new chamber music style promised by the title! Gigi Masin begins the set with eight short tracks that mix piano with other subtle sonic touches, all in a way that's ... CD

Pierre Henry Collector
Universal (France), 2010s. New Copy
CD...$12.99 16.99 (LP...$29.99)
A mindblowing journey in sound – a dip into the archives of French composer Pierre Henry – the postwar master of electronics and musique concrete, and an artist who was still very active in the final years of his life! The material here was all either recorded or reworked in Henry's ... CD