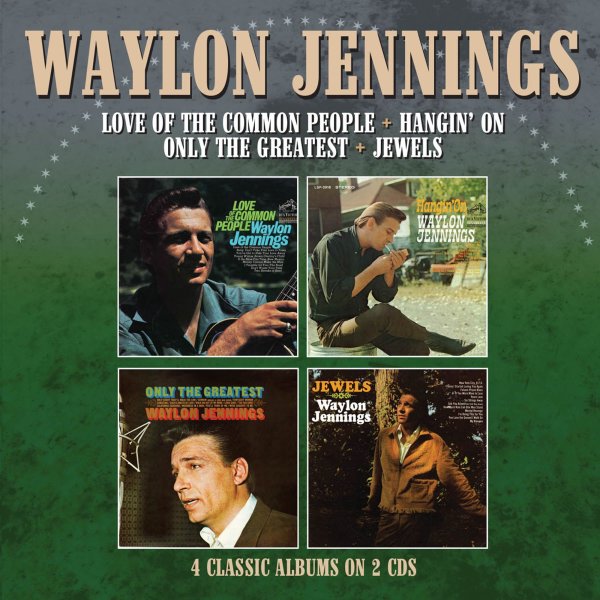 A quadruple package of late 60s albums from Waylon Jennings – served up here in a single set! First up is Love Of The Common People – a tremendous late 60s album from Waylon Jennings – a set that really has the singer finally finding his groove, and working that amazing vocal style towards the kind of material that would soon help him become the stuff of legend! At some level, it could be said that there are currents of folk on the album – at least in the choice of some of the tracks, including the title cut – but throughout, Waylon Jennings has a way of turning things towards the darker side of the spectrum, and delivering things in a way that goes way beyond familiar RCA Nashville territory! Titles include "Money Cannot Make The Man", "I Tremble For You", "If The Shoe Fits", "The Road", "Love Of The Common People", "You've Got To Hide Your Love Away", and "Taos New Mexico". Hangin On has Jennings emerging as a singer with a depth that goes way beyond some of the more pop-oriented country acts handled by Chet Atkins on RCA, with a way of transforming tunes and really making them feel like they were all his own! Jennings did write a few of the words on the set, but most of the music is by well-chosen contemporary songwriters – spreading out with a slightly larger scope than some of the other RCA acts might handle – which might be an indication of the larger audience that Jennings would soon reach with his music! Titles include "The Crowd", "The Chokin' Kind", "I Fall In Love So Easily", "How Long Have You Been There", "Julie", "Looking At A Heart That Needs A Home", "Woman Don't You Ever Laugh At Me", and "Lock Stock & Teardrops". Only The Greatest is a damn near perfect batch of top notch honky tonk numbers from the late 60s! Waylon's distinctive voice works its magic on a bunch of great tunes, including honky tonk classics like "Only Daddy That'll Walk That Line", Harlan Howard's "California Sunshine", plus some song choices that steer towards countrypolitan, pop and folk, but really brought into Waylon's world regardless, via his incredible voice, which is at peak power at this point. Other titles include "Weakness In A Man", "Sorry (Breaks A Good Man Down)", "Christina", "Kentucky Woman", "Long Gone", "Wave Goodbye To Me", and "Too Far Gone". Jewels is a record with a very well-put title – as the set's filled with late 60s jewels by the amazing Waylon Jennings – tracks from a time before the singer was hitting as big as he should have, but which are perfect for digging out and loving again as the years go on! Jennings has an edge and darkness here that's so different than so many of his contemporaries – a quality that maybe resonates with Johnny Cash's best moments, but which has a focus here that avoids some of the mis-steps that could often be more frequent on Johnny's studio albums at the time – really rock-solid presentation throughout, as Waylon takes on tunes by Harlan Howard, Merle Haggard, and Dallas Frazier – and throws his own tune into the mix too. Titles include "New York City RFD", "Six Strings Away", "How Much Rain Can One Man Stand", "Today I Started Loving You Again", "If You Were Mine To Lose", and "See You Around.  © 1996-2022, Dusty Groove, Inc.