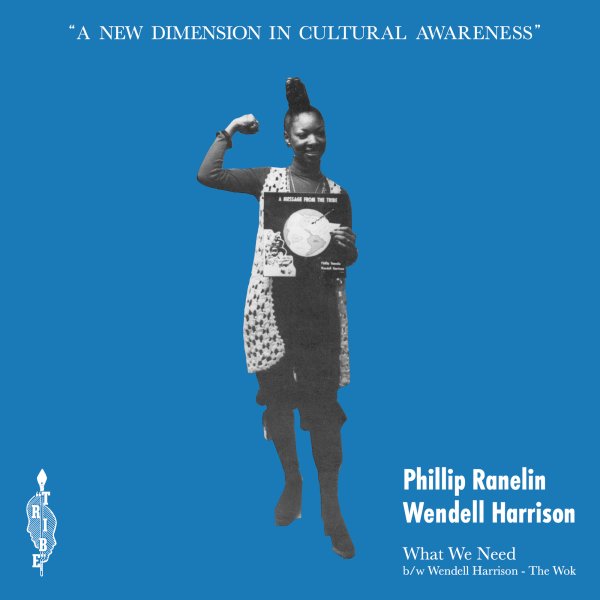 A beautiful little picture sleeve pressing of two cuts from the rare Tribe Records years – both appearing here on 45 for the first time ever! "What We Need" is a slow-building cut with a very righteous message – Fender Rhodes slow-stepping in the groove as the horns rise up, and a sweet female vocal delivers the lyrics! "The Wok" is of slightly later vintage – early 80s work from Wendell Harrison that has this cool electro sort of update of earlier soul jazz modes – complete with a nice flute solo in the mix!  © 1996-2022, Dusty Groove, Inc.

Apache/The Champ
P-Vine (Japan), 2022. New Copy (pic cover)
7-inch...$18.99 23.99
Ingram take on two funky classics – as you might guess from a single with a cover that takes off on a classic album by The Mohawks! Both cuts here are very old school – as "The Champ" has all the breaking drums, congas, and sweet funky organ of the original version by The ... 7-inch, Vinyl record

Soul Impressions/Drug Song
P-Vine (Japan), Early 70s. New Copy (pic cover)
7-inch...$16.99 24.99
Two beautiful grooves from sound library genius Janko Nilovic – both of them completely sublime! "Soul Impressions" definitely lives up to its title, but has a special sort of flavor too – this cool way of stepping into the groove at the start, completely with a lightly ... 7-inch, Vinyl record

Black Lights (original, flute version)
Four Flies (Italy), 1981. New Copy
7-inch...$16.99 19.99
A rare sound library cut, and one with a sound and style that's all its own – as well as a vibe that hardly sounds like anything else we might have expected from the recording date of 1981! The original track almost has the vibe of some sort of Salah Ragab track from the Egyptian scene ... 7-inch, Vinyl record

Moja Bhari Moja/East West Shuffle
Numero, 1982. New Copy (pic cover)
7-inch...$7.99 9.99
"Disco Jazz" is plastered on the cover, but "Moja Bhari Moja" has a groove that's way more than just that – soaring vocals from Rupa Biswas, recorded up in Canada with a host of funky players – all in a cool mix that uses guitar, bass, and keyboards next to sarod and ... 7-inch, Vinyl record

Got To Move On (remix)/Rosa Da Ribeira (remix)
Schema (Italy), 2022. New Copy (pic cover)
7-inch...$14.99 18.99
A great remix here from Afra Kane – who opens up the soulful sound of "Got To Move On" in a really great way! Kane puts lead vocals over the track, which has much more of a Brand New Heavies sort of vibe than anything else we've ever heard from S-Tone – although the man ... 7-inch, Vinyl record

We Party/Let's Party
GED Soul, 2022. New Copy
7-inch...$5.99 8.99
Heavy funk from the Half-Truths – a combo we're usually used to hearing behind a singer, but who can more than enough knock this one out of the park on their own! "We Party" has these fast romping drums peppered with horns – moving at a nice clip while guitar weaves in and ... 7-inch, Vinyl record