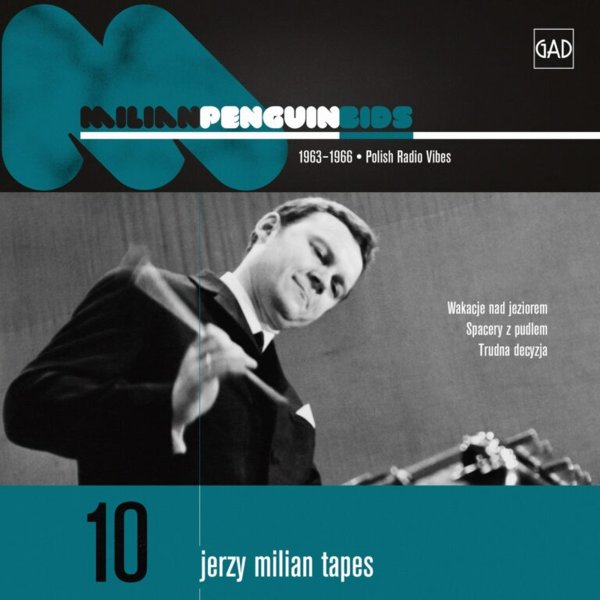 Rare 60s work from the world of Polish vibist Jerzy Milian – not sounds from his own group, but that of the Polish Radio dance band – headed up by Edward Czerny, and featuring here a whole set of original compositions and arrangements by Milian! Jerzy plays some solo vibes on the set, and there's also solo work from Albert Pradella on tenor, Franciszek Kowalski on trumpet, and Waclaw Lesicki on flute – players who get some brief time in the spotlight, over work that's mostly in an ensemble mode overall. The approach is a bit like that of Gustav Brom at the same time – lively, swinging, and kind of an Eastern European extrapolation of modes borrowed from Duke Ellington and Count Basie, with all the rhythm and color that would imply! Titles include "Zabwa Prazy Swiecach", "Spaicy Dorozkarz", "Dwaj Panowie M", "Koleka W Grenoble", "Mala Suita Na Big Band", and "Spacery Z Pudlem".  © 1996-2021, Dusty Groove, Inc.

Wieczorem Po Marszalkowskie – 1967 Polish Library Music From WFDIF Vaults
GAD (Poland), 1967. New Copy
CD...$18.99 22.99
Very cool sounds from an obscure Eastern European source – music that was used as part of the Polish Film Chronicle – a propaganda system of sorts, and one that always sought to portray Polish culture with an upbeat sort of spin! That quality is definitely part of the music here – ... CD

Symbiosis (2CD version – with bonus tracks)
Supraphon/GAD (Poland), 1973. New Copy 2CD
CD...$19.99 24.99
One of the hippest jazz groups going in Czechoslovakia during the 70s – the mighty Jazz Q, a cool fusion combo who really knew how to groove! The group's lineup includes a lot of electric keyboards and guitars – and while some tracks have them jamming out in a really rock-inspired way, ... CD

Unitron – 1963 Polish Library Music From WFDiF Vaults
GAD (Poland), 1963. New Copy
CD...$18.99 22.99 (LP...$29.99)
Fantastic work from a saxophonist we're hearing here for the first time ever – Boguslaw Rudzinski, who recorded this set in 1963 – right at the same time Krzystof Komeda and his generation were opening up doors in modern jazz on the Polish scene! Rudzinski is maybe a bit more inside ... CD