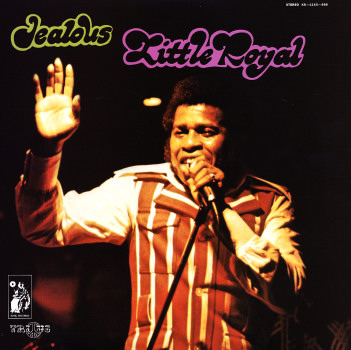 An obscure little album – but one that's had surprising life in recent years, thanks to a great batch of funky tracks on the set! Little Royal is one of those soul singers who doesn't mind borrowing bits from bigger stars as long as they work well in his act – stepping out like Garland Green on the album's title version of "Jealous Kind Of Fellow" (oddly credited to Royal as the writer!), or like Joe Tex on some of the mellower southern soul numbers – but sounding even better as a rougher James Brown-styled singer on the album's funkier tracks! Huey P Meux produced the record down in Houston, but he's clearly trying to give the record some of the grittier styles of Brown's later work on King – possibly in the hopes that Royal might replace him as King's leading star when James departed for Polydor. Titles include the classics "Razor Blade" and "Panama Red", both great instrumental numbers that crackle like some of JB's late King work – plus "I'll Come Crawling", "Soul Train", "Losing Battle", "Jealous", and "My Love Needs Company".  © 1996-2022, Dusty Groove, Inc.

Singin & Swingin
King, Late 50s/Early 60s. New Copy (reissue)
LP...$9.99 12.98 (LP...$11.99)
Some of the hardest, heaviest vocal group work of the pre-soul generation – a set of legendary King Records material by the young Hank Ballard and his always-tight Midnighters! The set captures them in the second chapter of their time at King – slightly cleaner in some of their subject ... LP, Vinyl record album

Harlem Underground
Winley/Demon (UK), 1976. New Copy (reissue)
LP...$29.99 (LP...$9.99, CD...$7.99)
A legendary album – and for good reason too – a set that's as mysterious as it is funky, and a record that's stayed at the top of our crates for years! The album features a really unusual collective of musicians, pulled together under the guidance of producer Paul Winley – a ... LP, Vinyl record album