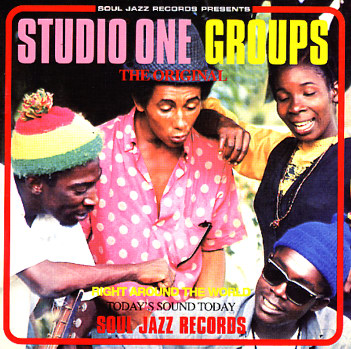 Also available
Various — Studio One Groups (red CD pressing) ... CD 21.99
A seminal look at the sound of harmony soul in Jamaican music – the special way that a label like Studio One could take an American vocal approach, then find new life when pairing the style with the hippest sounds in Kingston! The collection follows the initial rise of group vocals in the rocksteady years, and moves all the way through the roots reggae generation – moving from more popular themes to more righteous modes – all with the nicely sharp production of Studio One to guide things along! As with other Soul Jazz collections of work on the label, the package is definitely a cut above – with a superb choice of cuts that includes "Solid Foundation" by the Righteous Flames, "Things A Come Up To Bump" by the Bassies, "You Will Never Know" by the Mad Lads, "What Is It" by the Consummates, "The Struggle" by The Viceroys, "Get In The Groove" by the Heptones, "Pick Up The Pieces" by the Royals, "Jah Jah Go Before Us" by the Gladiators, "Love & Affection" by Bob Marley & The Wailers, "Down Presser International" by the Stingers, "Baby Why" by The Cables, "You Can't Be Happy" by The Clarendonians, and "Cheating & Lying" by the Silvertones.  © 1996-2022, Dusty Groove, Inc.
(Limited edtion red vinyl pressing – includes download!)