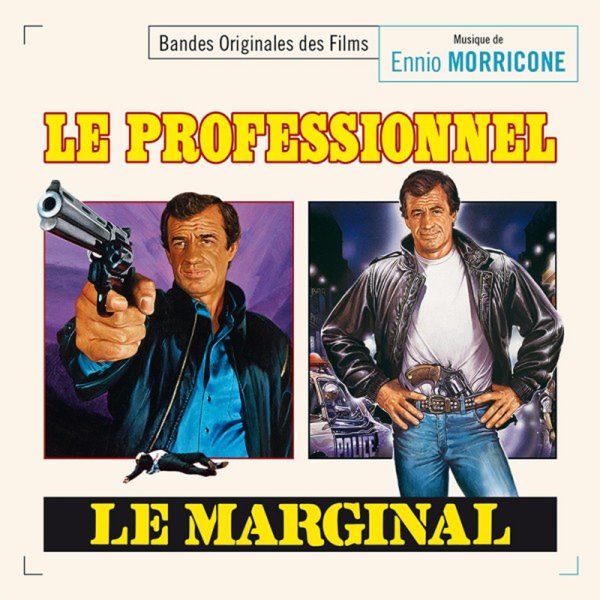 A pair of classic 80s scores from Ennio Morricone – both done for a series of films that feature Jean Paul Belmondo in an action role! First up is Le Professionnel – a great little Morricone soundtrack – later than most of the classic work, but done for a French thriller that starred Jean-Paul Belmondo, with some great spare compositions that have slight romantic French soundtrack touches! There's some great numbers that feature Morricone's style of drifting solo instruments over strings – including some cool piano with a very offbeat feel – and others that have a wonderfully sweeping full and majestic feel! But given the action in the narrative, there's also a nice undercurrent of darkness too – which keeps things interesting and powerful throughout – in the best manner of a Morricone cop/crime film of the 70s. Titles include "D'Afrique", "Chi Mai", "Le Retour", "Le Vent Le Cri", and "Decision Finale". CD features 26 tracks in all – way more than the original album! Next up is Le Marginal – Ennio Morricone's score for the second Jean-Paul Belmondo "Professionel" police film – written two years after the first soundtrack, and with a feel that's a bit more electric and cop show-oriented! There's still plenty of great Morricone touches on the set – including his strong penchant for using space to really heighten the tension of a theme – but the instrumentation also features some electric bass undercurrents that are a bit stronger than usual, making for more of a cop funk groove than you'd expect from Morricone! This expanded CD edition features a total of 25 tracks – far more than the original album – and titles include "Le Marginal", "HSM", "Hypertension", "Theme Classique", "Don't Think Twice", and "Dreamer".  © 1996-2023, Dusty Groove, Inc.
(Limited edition of 500!)