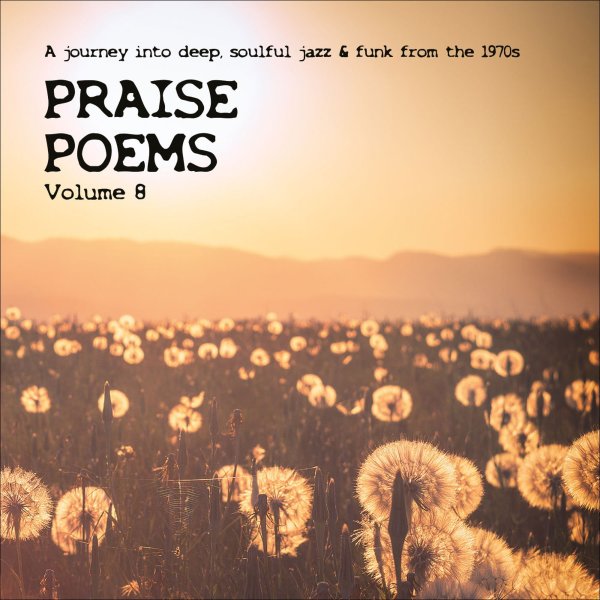 Also available
Various — Praise Poems 8 – A Journey Into Deep Soulful Jazz & Funk From The 1970s ... CD 14.99
A tremendous entry in this great series that seems to go out of its way to prove that you can't judge a book by its cover – as the whole thing has nothing to do with flowers in a field, and instead overflows with rare jazzy cuts from the 70s! There's a very special vibe to the Praise Poems series – not jazz funk or spiritual jazz, but a breed that's somehow in between – often nicely compact, and with vocal cuts as much as instrumental – very obscure work, but always wonderfully groovy too – at a level that has you realizing that even if you think you know a lot about jazz, there's always a lot more to learn. Titles include "Make It Happen" by Penn Central, "Got To Turn Away" by Harve & Charee, "It's Time For Music" by Portraits In Sound, "Girl We Really Done It This Time" by Vision, "Welche Farbet Hat Der Wind" by Hans Hass, "They All Seem To Know" by The Menagerie, "Frozen Love" by Fang Buzbee & Sutton, "Song For A Girl" by Garndarf, "Around This Time" by Flash, and "Water Gardens Of The Moon" by Klaas Craats Six.  © 1996-2023, Dusty Groove, Inc.
(Includes download and oversize insert of notes!)

WaJazz – Japanese Jazz Spectacle Vol 2 – Deep, Heavy, & Beautiful Jazz From Japan 1962 to 1985 – The King Records Masters
180g (UK), Late 60s/1970s/Early 80s. New Copy 2LP Gatefold
LP...$39.99 44.99
A wonderfully wide-ranging look at the more unique aspects of Japanese jazz from the 60s onward – a set that mixes together spiritual tracks, bossa nova, and some surprisingly soulful tracks too – all from records that were only ever issued in Japan! If you've heard the great first ... LP, Vinyl record album

Living In The Streets – Wah Wah Jazz, Funky Soul, & Other Dirty Grooves
BGP (UK), Late 60s/Early 70s. New Copy 2LP
LP...$22.99
A great little collection that definitely lives up to the promise of "dirty grooves" in the title – as many of these numbers have a sharp edge and gritty side to their instrumentation – which means that even the familiar artists sound nice and heavy in this setting – ... LP, Vinyl record album