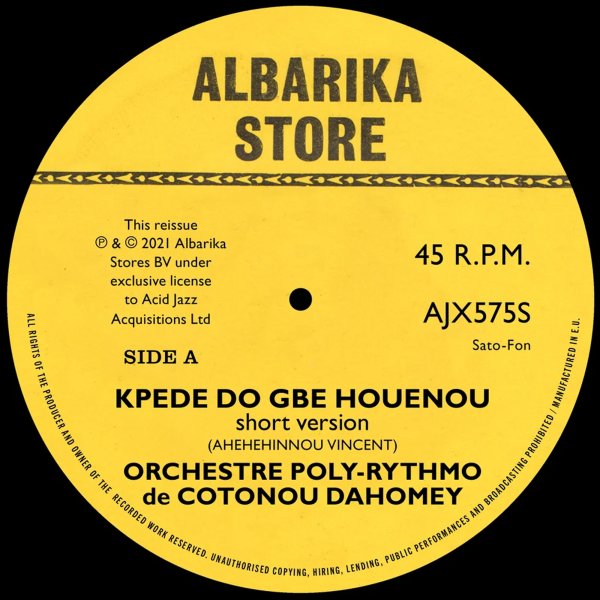 Two funky nuggets from the legendary TP Orchestre! "Kpede Do Gbe Houenou" is a masterpiece of funky bass and offbeat horns – a really unusual groove that gets even weirder in the middle – as this long electric piano solo comes into the mix, and almost makes you think that Sun Ra is along for the ride! The flipside has some amazing drums – nicely snapping on the snare at the start, which sets a guitar riffing along super-past – almost a "Shaft" theme energy, but with a very West African spin!  © 1996-2022, Dusty Groove, Inc.

Basto/Spadille
Wildcards, 2022. New Copy
7-inch...$12.99 14.99
A really cool take on the funky 45 – a number that almost feels as if it were recorded at 45rpm, then played at 33 – which gives the whole thing a sinister slow funk vibe that's mighty nice! "Spadille" is on the flipside – and begins with a nice raw percussion part that ... 7-inch, Vinyl record

Daredevil's Club/Lucky Devil
Wildcards, 2022. New Copy
7-inch...$12.99 14.99
The Soul Devils definitely earn their name here – with two devilish little grooves! The main cut has a blend of funky rhythms and horns that almost feels like some blacksploitation nugget from way back – but delivered with a much leaner style overall, and a stripped-down quality that's ... 7-inch, Vinyl record

Sigmund Jahn Bossa/Aquaria
Funk Night, 2021. New Copy
7-inch...$12.99 14.99
A fantastic pairing of talents here – as Shawn Lee brings a nice retro vibe to the moody groove of "Sigmund Jahn Bossa" – while Misha Panfilov delivers the kind of warm keyboard lines he does so well! The tune's definitely bossa, but more of the sort you'd find on some cool ... 7-inch, Vinyl record

Do It On The One (Stay In The Pocket)/Ain't It A Crime
Funk Night, 2021. New Copy
7-inch...$6.99 8.99
Rickey Calloway is one of the few singers we can say really inhabits the spirit of James Brown and gets the sound totally right – from his razor-sharp vocal approach on the lyrics, to the equally sharp sound of his group – as Calloway always seems to work with the best! "Do It On ... 7-inch, Vinyl record