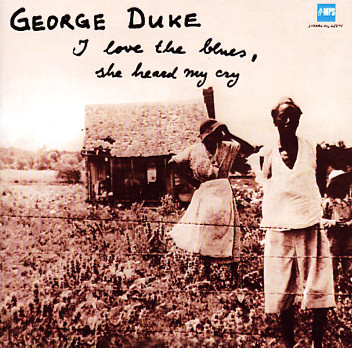 I Love The Blues, She Heard My Cry

One of George Duke's best albums for the MPS label – and a set that has a sound that's a little bit more soul than before! The album uses a fair bit of vocals alongside Duke's funky keyboards – but in a way that's not nearly as smooth as some of his albums for Epic, and which still retains all the best spacey and cosmic bits of his roots! The record's got a strong west coast soul feel – with elements of some of the jazzy funk of the Fantasy Records/Bay Area scene, and elements of the electric funk that was starting to come out of LA at the time – and there's a huge host of guest stars on the record, including Johnny Guitar Watson (who sings on one track), Emil Richards (who plays marimba), and Flora Purim (who does her usual thing!) Titles include "Chariot", "Someday", "That's What She Said", "Sister Serene", "Prepare Yourself", "Rokkinrowl", and "Look Into Her Eyes".  © 1996-2021, Dusty Groove, Inc.
(Out of print, 2006 Japanese pressing – includes obi!)

Don't Let Go (Japanese pressing)
Epic (Japan), 1978. Used
CD...$11.99 (CD...$9.99)
A sweet bit of modern funk from George Duke – working here in a mode that's definitely tighter and more soul-based than his trippier albums of the early 70s – but also in a groove that's pretty darn sweet! George wonderfully blends together his jazz roots and some of the wider soul ... CD

Don't Let Go
Epic, 1978. Used
CD...$9.99 (CD...$11.99)
A sweet bit of modern funk from George Duke – working here in a mode that's definitely tighter and more soul-based than his trippier albums of the early 70s – but also in a groove that's pretty darn sweet! George wonderfully blends together his jazz roots and some of the wider soul ... CD

Cross Country Tour 1958 to 1961
Chess/Universal, Late 50s/Early 60s. Used 2 CDs
CD...$5.99
Excellent live work by Ahmad Jamal – recorded during his classic years, when he was wowing audiences all over the US! The set features 2 CDs, with material recorded at the Pershing Lounge and Alhambra in Chicago, The Spotlite Club in Washington DC, and the Black Hawk in San Francisco. On ... CD

Jazz In Paris – Stephane Grappelli Plays Cole Porter
Universal (France), 1975/1976. Used
CD...$5.99
Later work by this famous French jazz violinist – recorded in two sessions, one with Eddy Louiss on organ, plus piano by Maurice Vander, drums by Daniel Humair, and bass by Luigi Trussardi; and another with a similar lineup, plus guitar by Jimmy Gourley, and Guy Pederson on bass instead of ... CD

Jazz In Paris – Sammy Price & Doc Cheatham Play George Gershwin
Universal (France), 1956/1958. Used
CD...$9.99
Rare Parisian recordings made by these two American jazz traditionalists – the kind of sessions that are keen proof of the standard line "they really appreciate our musicians a lot better in France!" The first 16 tracks on the CD are solo piano ones, recorded by Sammy Price in 1956 ... CD